The weaker sex – boys are being outclassed by girls

REPOST FROM THE ECONOMIST: The weaker sex

Boys are being outclassed by girls at both school and university, and the gap is widening

“IT’S all to do with their brains and bodies and chemicals,” says Sir Anthony Seldon, the master of Wellington College, a posh English boarding school. “There’s a mentality that it’s not cool for them to perform, that it’s not cool to be smart,” suggests Ivan Yip, principal of the Bronx Leadership Academy in New York. One school charges £25,000 ($38,000) a year and has a scuba-diving club; the other serves subsidised lunches to most of its pupils, a quarter of whom have special needs. Yet both are grappling with the same problem: teenage boys are being left behind by girls.

It is a problem that would have been unimaginable a few decades ago. Until the 1960s boys spent longer and went further in school than girls, and were more likely to graduate from university. Now, across the rich world and in a growing number of poor countries, the balance has tilted the other way. Policymakers who once fretted about girls’ lack of confidence in science now spend their time dangling copies of “Harry Potter” before surly boys. Sweden has commissioned research into its “boy crisis”. Australia has devised a reading programme called “Boys, Blokes, Books & Bytes”. In just a couple of generations, one gender gap has closed, only for another to open up.
The reversal is laid out in a report published on March 5th by the OECD, a Paris-based rich-country think-tank. Boys’ dominance just about endures in maths: at age 15 they are, on average, the equivalent of three months’ schooling ahead of girls. In science the results are fairly even. But in reading, where girls have been ahead for some time, a gulf has appeared. In all 64 countries and economies in the study, girls outperform boys. The average gap is equivalent to an extra year of schooling.

xx > xy?
The OECD deems literacy to be the most important skill that it assesses, since further learning depends on it. Sure enough, teenage boys are 50% more likely than girls to fail to achieve basic proficiency in any of maths, reading and science (see chart 1). Youngsters in this group, with nothing to build on or shine at, are prone to drop out of school altogether.

To see why boys and girls fare so differently in the classroom, first look at what they do outside it. The average 15-year-old girl devotes five-and-a-half hours a week to homework, an hour more than the average boy, who spends more time playing video games and trawling the internet. Three-quarters of girls read for pleasure, compared with little more than half of boys. Reading rates are falling everywhere as screens draw eyes from pages, but boys are giving up faster. The OECD found that, among boys who do as much homework as the average girl, the gender gap in reading fell by nearly a quarter.

Once in the classroom, boys long to be out of it. They are twice as likely as girls to report that school is a “waste of time”, and more often turn up late. Just as teachers used to struggle to persuade girls that science is not only for men, the OECD now urges parents and policymakers to steer boys away from a version of masculinity that ignores academic achievement. “There are different pressures on boys,” says Mr Yip. “Unfortunately there’s a tendency where they try to live up to certain expectations in terms of [bad] behaviour.”

Boys’ disdain for school might have been less irrational when there were plenty of jobs for uneducated men. But those days have long gone. It may be that a bit of swagger helps in maths, where confidence plays a part in boys’ lead (though it sometimes extends to delusion: 12% of boys told the OECD that they were familiar with the mathematical concept of “subjunctive scaling”, a red herring that fooled only 7% of girls). But their lack of self-discipline drives teachers crazy.

Perhaps because they can be so insufferable, teenage boys are often marked down. The OECD found that boys did much better in its anonymised tests than in teacher assessments. The gap with girls in reading was a third smaller, and the gap in maths—where boys were already ahead—opened up further. In another finding that suggests a lack of even-handedness among teachers, boys are more likely than girls to be forced to repeat a year, even when they are of equal ability.

What is behind this discrimination? One possibility is that teachers mark up students who are polite, eager and stay out of fights, all attributes that are more common among girls. In some countries, academic points can even be docked for bad behaviour. Another is that women, who make up eight out of ten primary-school teachers and nearly seven in ten lower-secondary teachers, favour their own sex, just as male bosses have been shown to favour male underlings. In a few places sexism is enshrined in law: Singapore still canes boys, while sparing girls the rod.

Some countries provide an environment in which boys can do better. In Latin America the gender gap in reading is relatively small, with boys in Chile, Colombia, Mexico and Peru trailing girls less than they do elsewhere. Awkwardly, however, this nearly always comes with a wider gender gap in maths, in favour of boys. The reverse is true, too: Iceland, Norway and Sweden, which have got girls up to parity with boys in maths, struggle with uncomfortably wide gender gaps in reading. Since 2003, the last occasion when the OECD did a big study, boys in a few countries have caught up in reading and girls in several others have significantly narrowed the gap in maths. No country has managed both.

Onwards and upwards
Girls’ educational dominance persists after school. Until a few decades ago men were in a clear majority at university almost everywhere (see chart 2), particularly in advanced courses and in science and engineering. But as higher education has boomed worldwide, women’s enrolment has increased almost twice as fast as men’s. In the OECD women now make up 56% of students enrolled, up from 46% in 1985. By 2025 that may rise to 58%.

Even in the handful of OECD countries where women are in the minority on campus, their numbers are creeping up. Meanwhile several, including America, Britain and parts of Scandinavia, have 50% more women than men on campus. Numbers in many of America’s elite private colleges are more evenly balanced. It is widely believed that their opaque admissions criteria are relaxed for men.

The feminisation of higher education was so gradual that for a long time it passed unremarked. According to Stephan Vincent-Lancrin of the OECD, when in 2008 it published a report pointing out just how far it had gone, people “couldn’t believe it”.

Women who go to university are more likely than their male peers to graduate, and typically get better grades. But men and women tend to study different subjects, with many women choosing courses in education, health, arts and the humanities, whereas men take up computing, engineering and the exact sciences. In mathematics women are drawing level; in the life sciences, social sciences, business and law they have moved ahead.

Social change has done more to encourage women to enter higher education than any deliberate policy. The Pill and a decline in the average number of children, together with later marriage and childbearing, have made it easier for married women to join the workforce. As more women went out to work, discrimination became less sharp. Girls saw the point of study once they were expected to have careers. Rising divorce rates underlined the importance of being able to provide for yourself. These days girls nearly everywhere seem more ambitious than boys, both academically and in their careers. It is hard to believe that in 1900-50 about half of jobs in America were barred to married women.

So are women now on their way to becoming the dominant sex? Hanna Rosin’s book, “The End of Men and the Rise of Women”, published in 2012, argues that in America, at least, women are ahead not only educationally but increasingly also professionally and socially. Policymakers in many countries worry about the prospect of a growing underclass of ill-educated men. That should worry women, too: in the past they have typically married men in their own social group or above. If there are too few of those, many women will have to marry down or not at all.

According to the OECD, the return on investment in a degree is higher for women than for men in many countries, though not all. In America PayScale, a company that crunches incomes data, found that the return on investment in a college degree for women was lower than or at best the same as for men. Although women as a group are now better qualified, they earn about three-quarters as much as men. A big reason is the choice of subject: education, the humanities and social work pay less than engineering or computer science. But academic research shows that women attach less importance than men to the graduate pay premium, suggesting that a high financial return is not the main reason for their further education. 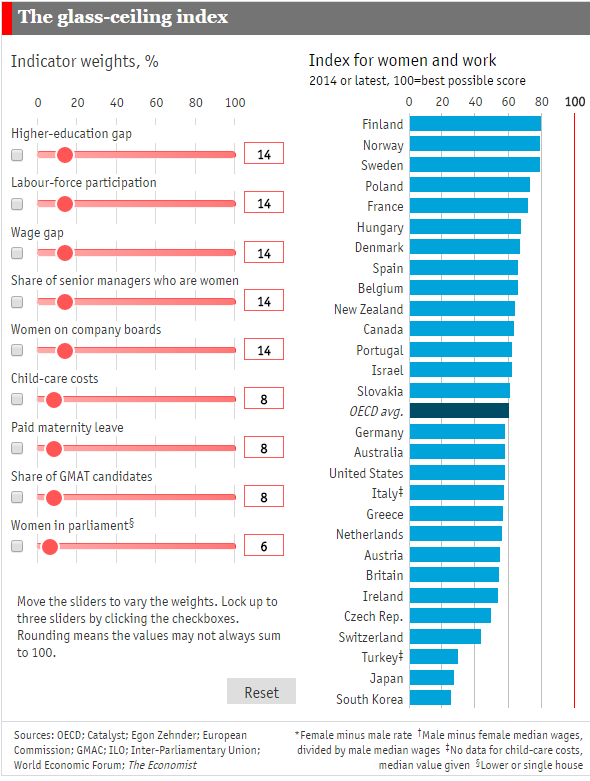 At the highest levels of business and the professions, women remain notably scarce. In a reversal of the pattern at school, the anonymous and therefore gender-blind essays and exams at university protect female students from bias. But in the workplace, says Elisabeth Kelan of Britain’s Cranfield School of Management, “traditional patterns assert themselves in miraculous ways”. Men and women join the medical and legal professions in roughly equal numbers, but 10-15 years later many women have chosen unambitious career paths or dropped out to spend time with their children. Meanwhile men are rising through the ranks as qualifications gained long ago fade in importance and personality, ambition and experience come to matter more.

The last bastion
For a long time it was said that since women had historically been underrepresented in university and work, it would take time to fill the pipeline from which senior appointments were made. But after 40 years of making up the majority of graduates in some countries, that argument is wearing thin. According to Claudia Goldin, an economics professor at Harvard, the “last chapter” in the story of women’s rise—equal pay and access to the best jobs—will not come without big structural changes.

In a recent paper in the American Economic Review Ms Goldin found that the difference between the hourly earnings of highly qualified men and their female peers grows hugely in the first 10-15 years of working life, largely because of a big premium in some highly paid jobs on putting in long days and being constantly on call. On the whole men find it easier than women to work in this way. Where such jobs are common, for example in business and the law, the gender pay gap remains wide and even short spells out of the workforce are severely penalised, meaning that motherhood can exact a heavy price. Where pay is roughly proportional to hours worked, as in pharmacy, it is low.

There will always be jobs where flexibility is not an option, says Ms Goldin: those of CEOs, trial lawyers, surgeons, some bankers and senior politicians come to mind. In many others, pay does not need to depend on being available all hours—and well-educated men who want a life outside work would benefit from change, too. But the new gender gap is at the other end of the pay spectrum. And it is not women who are suffering, but unskilled men.

REPOSTED FROM THE ECONOMIST