He was grateful. She was happy. Then there’s the Award.

February 24, 2017
We spoke for an hour, maybe more. There we were on the side if the long track in the chilly air. Watching the skaters fly by. Fortunately for us all we found some time to visit. Gilmore and Hector, in particular.

The story started way back-three years ago. Sitting on the edge of my seat watching the Russian Sochi Olympics, I was here in Vancouver. This is how I always watch the Olympics starting way back as a little girl. On the edge of my seat; sometimes standing up and cheering. It was always hard to sit still. 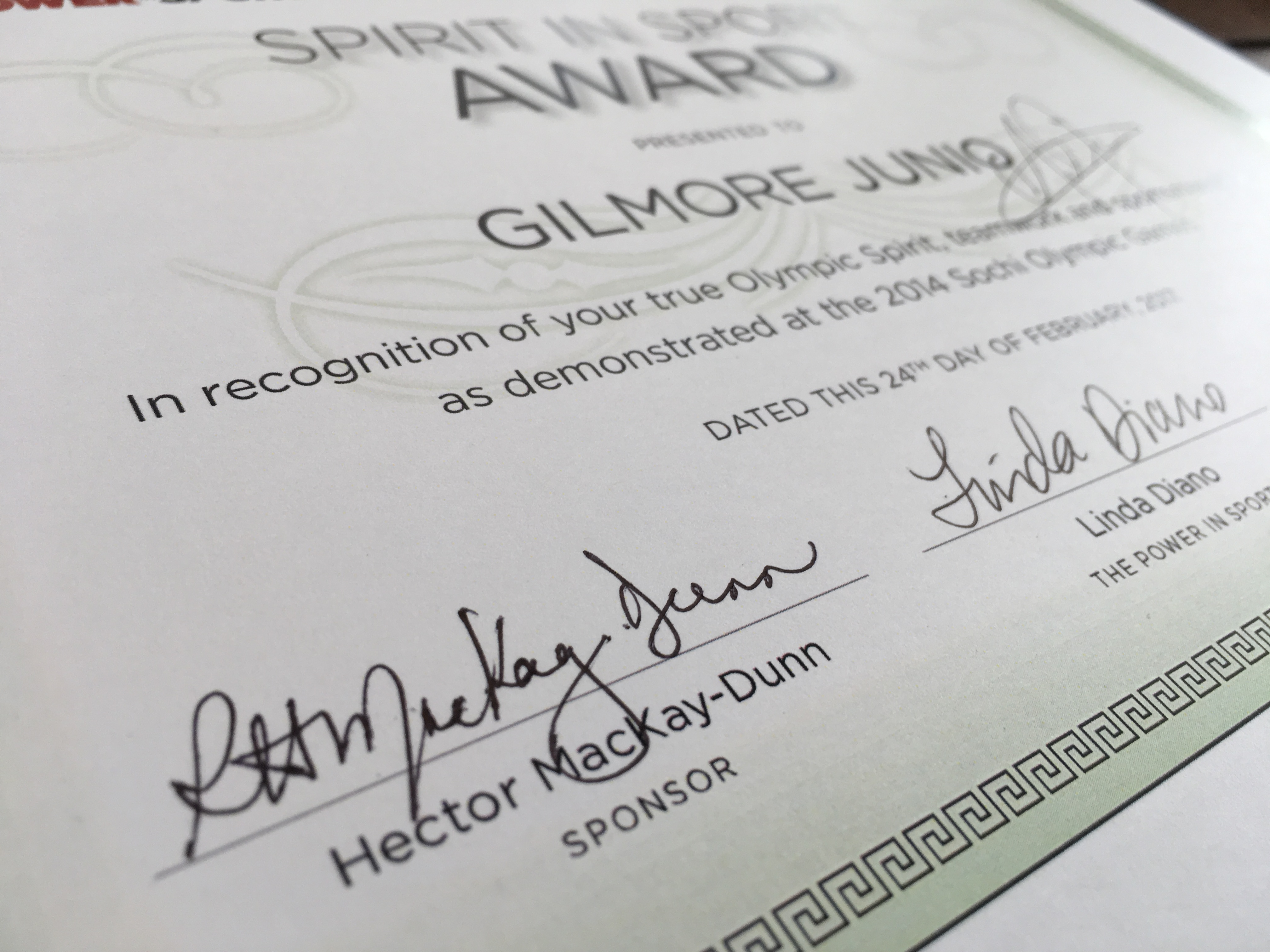 My first Games I recall was the Commonwealth Games- maybe 40 years ago. Track and field was my sport. Watching from the floor up close to the tube TV, my being was enthralled with the image of a black Kenyan man running and winning. At the time I only registered his ease of his movement flowing down the track, arms up waving to the crowd. Victory. I wanted that, I wanted the taste of victory, and for years I would chase my own Olympic dream in track and field. Alas it wasn’t to be but oh the experiences and stories that I was a tiny part of. The memories and friends. More importantly, the formation of my character and skills that would later propel my through life and work would prove to be invaluable.

Back to Sochi and 2014. Long track speedskating came on the tele. At some point a clip aired about how a young man, a Canadian man, had given up his spot for his teammate. It sent chills and created real emotion for me, no doubt as it did for Canadians watching across the country.

The format of long track speed skating is such that pairs of competitors compete until all have completed. In many instances, one is racing against the leading time posted by the prior skater. Often a time in the later round of pairs surpasses all times and takes the medal. Denny Morrison, the Canadian who had accepted Gilmore Junio’s spot, had skated early on and it would be reasonable to expect he would fall out of contention as athletes in the later pairs would beat him. But that did not happen and he went on to win a silver Olympic medal and Canadian supporters would only deepen their appreciation for Gilmore’s gesture, for his giving up his spot. So much so that many speculated and advocated on Twitter that Gilmore be the Canadian flag bear in the Closing Ceremonies. Even though that did not come to pass it was still an amazing idea.

As I said, I was sitting on the edge of my seat in Vancouver (well sort of, I had come down with the flu and was quite horizontal) I had seen the outcome of Denny’s skate and knowing of Gilmore’s role, I immediately hopped onto the internet. My focus – to search for a phone number for the Canadian Olympic Association (I later found out it was the Canadian Olympic Committee not Association), was the easy part. Getting through to somebody on the other end was the hard part. They were all in Sochi. Eventually I got bounced to someone in the Canadian Olympic Foundation.

Next came the pitch. You know when you were so excited with an idea that you can barely contain yourself yet you somehow bring it down tonight and say “Hey hi I was just thinking that Gilmore Junio … do you know what happened… Did you see the race? ”

Not waiting for the reply I press on, “He should get an award for his selflessness, what do you think?” Person on the other end of the phone was dumbfounded. After a series of phone calls and conversations I realized that as inspiring as The Canadian Olympic organizations were, they didn’t really have much firepower invested in creating an award. I get it – in this case they were basically operating as a charity. The goodwill ($$$) of others makes them tick. I quickly realized I was going to have to drive most of this award if it was ever to be created.

I decided in a flash to start an enormous amount of work. Not knowing what I was getting myself into, I began working on a path forward to creating an award.

Now you know that every person needs support to get things done. Fortunately I had two people amongst many others who were the predominant forces behind this award. One was Jamie MacDonald, a professional leadership trainer here in Vancouver and moreso a developer of people. He’s a man that I consider to be a friend and mentor, who’s coached me on different tactics to engage not only the Canadian Olympic people but also to document and position this award. The other was one of my more important influential connections, Hector MacKay-Dunn, a well-known senior partner in a vancouver-based law firm focussing mainly on taking biotechnology and biopharmaceutical companies forward. He stepped forward to sponsor the award through his donation.

With a donor like Hector you can’t go wrong. 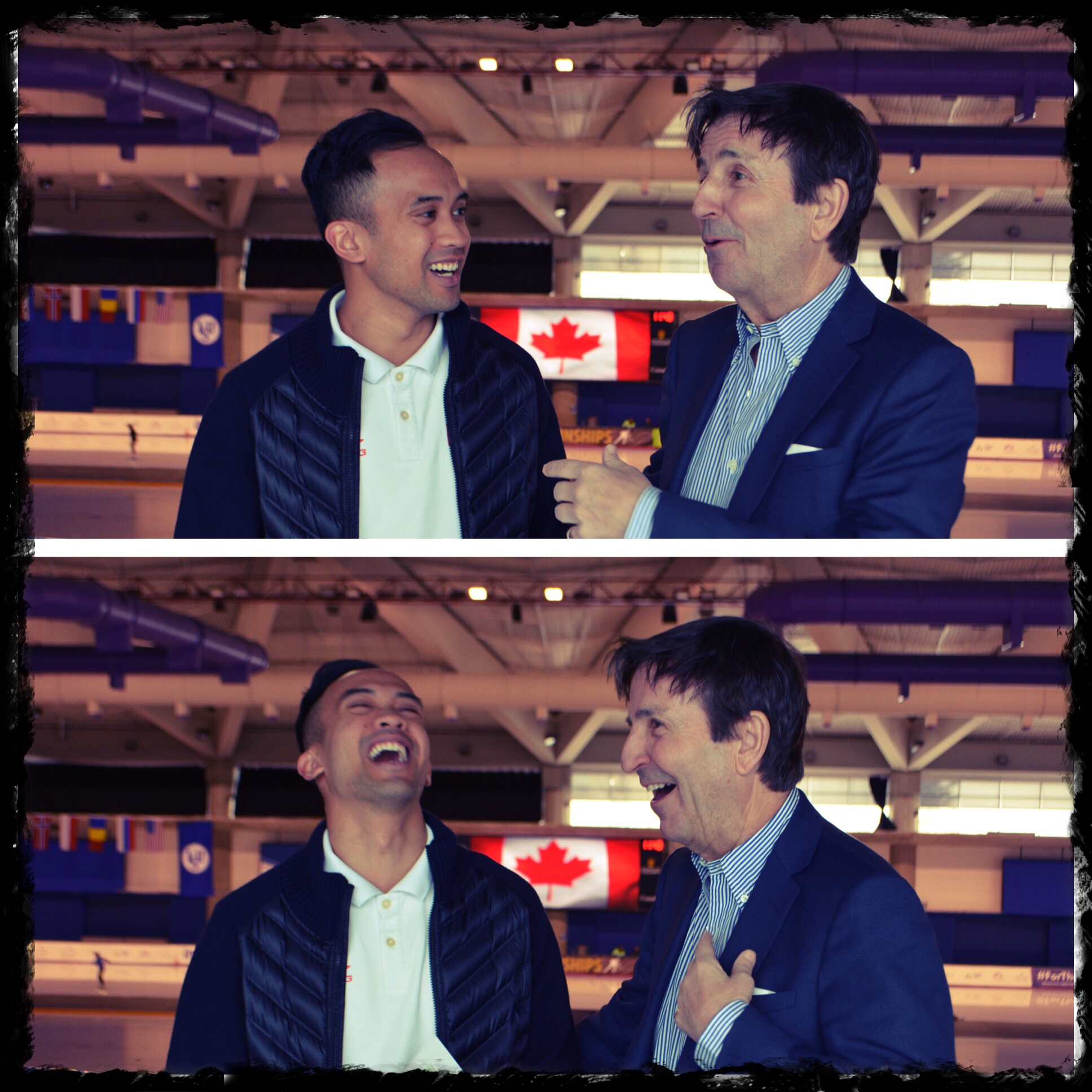 One of the things we wanted to do was identify others would perform selfless acts demonstrating the true spirit of sport. We identified several others and with the help of the Canadian Olympic Foundation, a panel was convened to select the ultimate beneficiary of the award. In the end it was unanimous that it should be Gilmore Junio.

Back to where I started this blog. Fast forward, there we were at the side of the ice finally connecting donor with the recipient — Hector and Gilmore.

Finally a moment of appreciation. I believe both men enjoyed it.